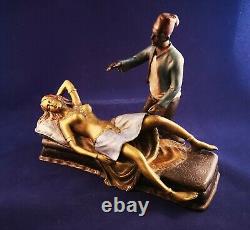 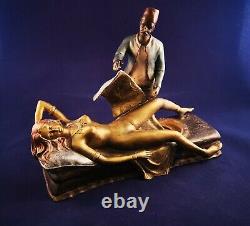 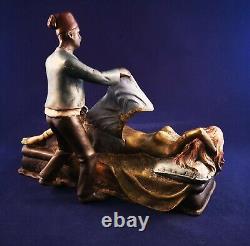 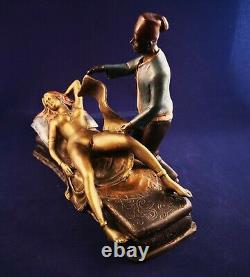 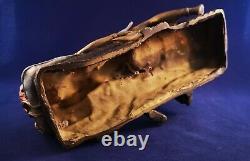 Austrian Cold Painted Bronze Naked Girl in Bed with Moroccan man F Bergmann. The sculpture is a cold painted bronze of a sleeping naked woman with a removable blanket with a Moroccan man stood at her side. The skirt is hinged at the back to reveal her naked lower body.

The sculpture is not signed but clearly the in the style of Bergmann. The approximate dimensions are 19cm long, 9cm wide, 15cm tall and weighs 1.11kg.

His father, Franz Bergmann (September 26, 1838 1894), was a professional chaser from Gablonz who came to Vienna and founded a small bronze factory in 1860. Franz Xaver Bergman inherited the company and opened a new foundry in 1900.

At the turn of the 19th century there were about fifty workshops producing Vienna bronzes. Cold-painted bronze' refers to pieces cast in Vienna and then decorated in several layers with so-called dust paint; the know-how for the mix of this kind of paint has been lost. The colour was not fired hence'cold painted'. The painting was carried out mainly by women working at home, a typical cottage industry.