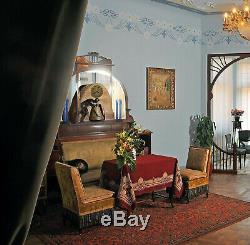 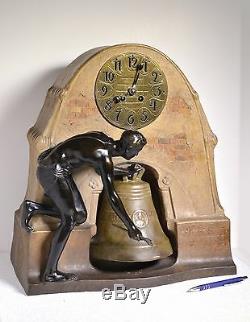 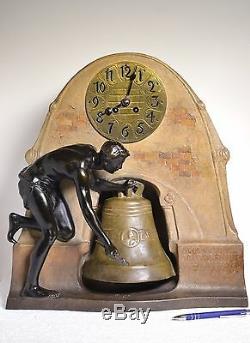 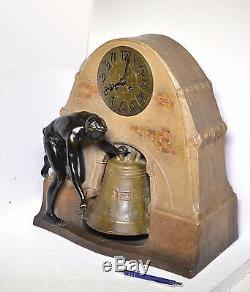 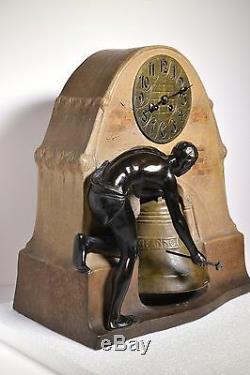 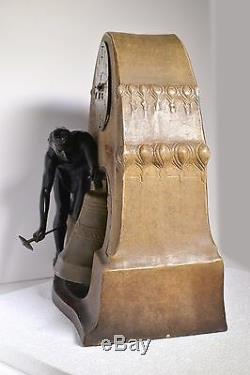 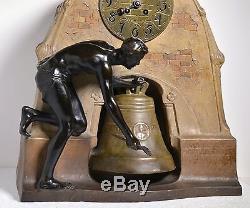 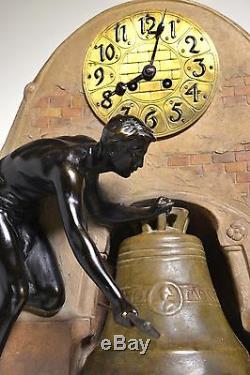 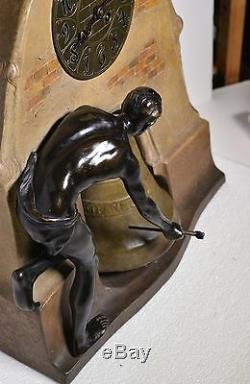 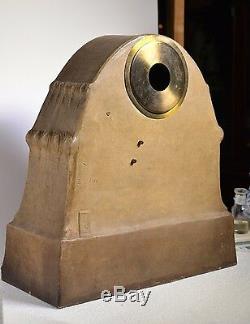 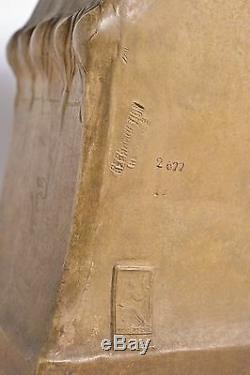 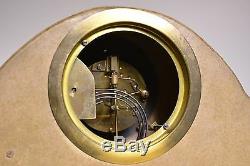 The Song of the Bell (Das Lied von der Glocke) is a poem by German poet Friedrich Schiller, published in 1798. It is one of the most famous poems of German literature and with 430 lines also one of the longest. In it, Schiller combinesa know ledgeable technical description of a bell founding with points of viewand comments on human life, its possibilities and risks. Motto: The first indented line between the title and the first stanza is in Latin andreads Vivos voco. Fulgura frango", approximately translating as "I call the living, I mourn the dead, I repel lightning. Culture /provenance: Austria Wien (Vienna) France Amiens / estate in Sweden. Motive and style: Art Nouveau Modernism. Technique (creation media): Hand painted molded ceramic; brass. Artist/Maker/Creator: French sculptor Albert Dominique ROZE (1861- 1952) for Austrian Goldscheider Art Ceramics.

Albert Roze, born August 4, 1861 in Amiens and died in this same city October 17, 1952 is a French sculptor. He is buried in Amiens at the old Saint-Acheul cemetery.

In 1873, he entered the municipal drawing school of Amiens at Malmaison, where he took lessons from the painter Leon Delambre, director of the museum of Picardy. He also attends the workshop of the sculptor Dufay where he meets the Duthoit brothers. His sculpture work in the courthouse having been noticed, the City of Amiens grants him a scholarship so that he can continue the study of sculpture at the Ecole des Beaux-Arts in Paris in the studios of Auguste Dumont and Jean-Marie Bonnassieux. He competes twice success at the Prix de Rome.

He worked in Paris from 1879 to 1891, then left for two years in Rome. On his return from Italy, the mayor of Amiens, Frédéric Petit, proposed him in January 1893 the direction of the school of fine arts of Amiens. He directed it until 1911 and taught art history there. He participated in commissions for the review of projects to erect memorials to the dead of the First World War after 1918 and is a member of the jury of the contest organized by the City of Montdidier for the choice of his memorial to soldiers killed at the war. His studio is located boulevard de Bapaume in Amiens.

In 1925, he was named "Rosati of honor" of the learned society of Rosati Picardy3. In 1939, he ensures the evacuation in the department of Indre works of the museum of Picardy of which he had become the curator. His personal collections were looted during the evacuation of the city of Amiens in May 1940.

Albert Roze leaves an abundant work and imprinted the city of Amiens with his sculptures erected in the public space of the city. His works reflect his attachment to Picardy and his interest in the social reality of his time. A number of countries have partially closed their borders to passenger traffic, which means that a large portion of the air traffic has been stopped. This is giving rise to restrictions in transport capacity, and thus problems transporting parcels and letters to large parts of the world. All EU / EUROPE countries; Australia; Hong Kong; Japan; Canada; Russia; South Korea; USA.

In many cases, the transport of letters and parcels will take place by land or sea, and may take longer than normal! We are working to find ways to send consignments to other countries in the world. AND LET OUR LORD BLESS YOU! KEEP COOL AND TAKE CARE! Our store is located in the beautiful city of Stockholm.

Useful to mention that we are trying to acquire wonderful art and antiques throughout Scandinavia. We own all necessary equipment for making firm and reliable packaging. We do appreciate your questions and inquiries, concerns and ideas!

We cordially thank you for your time and wish you good luck in winning these auctions! The item "Giant Antique Austrian Goldscheider Ceramic Clock 1903 Schillers Bell" is in sale since Monday, April 8, 2019.

This item is in the category "Antiques\Decorative Arts\Clocks". The seller is "scandinaviantique" and is located in Stockholm.