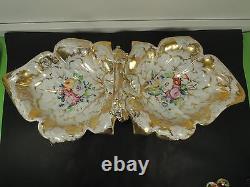 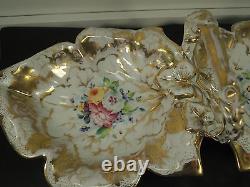 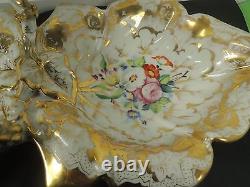 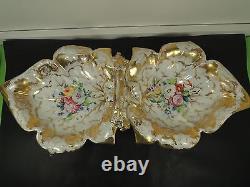 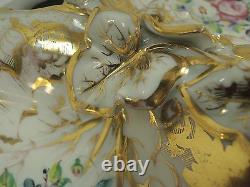 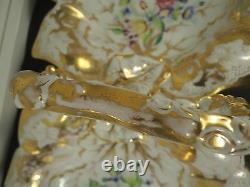 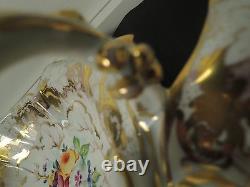 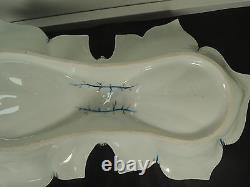 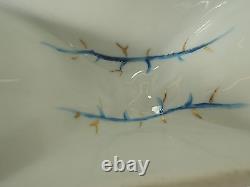 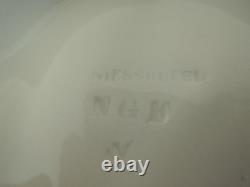 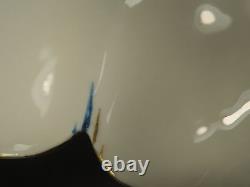 For your consideration is this Austrian Giesshuebl bowl. The dish have hand painted flowers on them and have gold decoration on them also. /Kysibl or German name Giesshübel/.

Today is the territory of the Czech Republic. The founder of porcelain Giesshübel (Czech Kysibl since 1949 used the newly created title Struzná) was a Christian Nonne from Erfurt.

The experienced businessman from Thuringia had rented for three porcelain factory, in Volkstedt, Ilmenau and Klásterec. In 1802 from Earl J.

Stibara Kysibelská leased estate, including the building of the former stables near the local castle. In January of the following year he asked the provincial Gubernium for permission to build a factory here stoneware and attached to his application and samples of their previous work (probably were products from its factories in Klásterec).

The application was considered favorably Nonne in the same year and moved into Kysibl in his 72 years started a new business. Although Nonne later a factory building and land from the Earl Stibara bought a site was rich in the necessary raw materials, factory prospered too. In addition to enabling earthenware produced here too rough porcelain - both commodities they differed only glaze and firing sharpness. Until 1814 the company operated under the name "Nonne and Rösch".

Hladik had no interest in the operation of the factory, so he rented a few years. Tenants were Knaute Benedict and Joseph Schmellowský, who took over the company in 1816. The company "Benedict Krau und Compagnie" has improved the quality of the Shard and paintings and expand production.

Josef Schmellowský died in 1828 and then led Knaute own plant until 1835. At that time, gained a partner Franz Lehnert, who worked at the factory since 1825 as head of operations. Thanks to his experience, product quality has improved so much that Knauteho factory has obtained municipal license for production of porcelain.

1840 Knaute resigned and tenant remained only Lehnert. Of his work, the factory has expanded, and in 1844 obtained permission to copperplate and lithography.

Then there were more than fifty employees and luxurious, richly decorated porcelain was exported mainly to Russia, Turkey and Poland. New factory owner became William Knight of Neuberg, who, along with the estate acquired by marriage to the daughter of HLADÍKOVÁ 1864.

He took the opportunity when Lehnert expired lease agreement, had it not extend. Lehnert had left the company and himself the same year opened a porcelain factory in red deer Lubenec. William of Neuberg received provincial permits in February 1847, when the factory was already well developed and employed nearly 80 people. In the mid-19th century porcelain Kysibelská offering everything from ordinary tableware, over the table and coffee service by English and French designs, decorative nástolce, fruit baskets, spa cups, figurines and toys to luxury vases and delicate sets with plastic congen rich painting and gilding. At the end of the 19th century consisted of hot zkozí accessible to all sections of the population the bulk of production.

In 1902 the factory was bought by Jan Neuberk Schuldes, who was its owner until it was nationalized in 1945. In 1958 the porcelain factory was incorporated into the departmental enterprise Carlsbad porcelain. The privatization of joint stock companies fell Epiag-DAFA. The buildings were partly demolished by 2009, to a lesser extent rebuilt. Initially, the products were labeled with a handwritten blue underglaze mark or green, black and purple on glaze.

The first mark used Ch. 1814 was the letter G intersected spear with arrows on both ends (in the permit application to produce literally stated "spear"). In the period 1811 to about 1828 is used with marks underglaze blue arrow a tapered only on one side - at the beginning of this period, an arrow pointing downward, then conversely up. In 1828 the existing brand added impressed initials tenant BK B. Knaute, which were then until 1840, used separately, even without the original blue marks.

In the period of the lease F. William Knight of Neuberg rokz introduced in 1840 marking the initials debossed lettering GIESSHÜBEL NGF, NGF itself or just the NG. By 1902, he was used only embossed lettering Giesshübel, after 1918, a new green printed mark owner's initials obsahuící again, this time in a coat of arms with a crown.

First it was the letters JSG J. Schuldes Giesshübel and the newly added inscription CZECHOSLOVAKIA or Made in Czechoslovakia after 1945 turned into JSK initials.

45 CM - 17.71 inches x 18cm-7.08 inches. PLEASE LOOK ALL THE PICTURES BELOW, BECAUSE THEY ARE PART OF THE DESCRIPTION OF THE ITEM! This item is in the category "Pottery & Glass\Decorative Cookware, Dinnerware & Serveware\Plates". The seller is "hobby_antique" and is located in this country: BG. This item can be shipped worldwide.